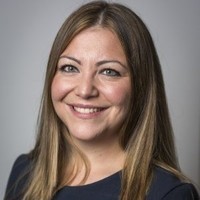 Vedrana is the founder and CEO of Ciel Capital, a principal, JV equity and asset management platform with a core focus on hospitality. Vedrana also co-founded Stow-Away, a design led aparthotel concept. The first Stow-Away will open in Lower Marsh, Waterloo in Summer 2018. Ciel is also redeveloping the former Methodist Central Hall in Birmingham into a 147-bed Unscripted by Dream Hotel Group with six F&B outlets and a 75-bed Stow-Away due to open late 2020.

Vedrana covers a wide range of areas including asset management, finance structuring and modelling, fundraising and legals. Prior to Ciel, Vedrana was a corporate finance manager at Pacific Investments and managing director of IPIN Global Capital and BridgePoint Ventures UK Ltd.

Vedrana graduated with a first class degree at the Sorbonne, Paris, followed by a Masters degree in London, where she got a distinction. A French national who was born in the former Yugoslavia, Vedrana is fluent in five languages. Vedrana is a member of The Monopoly Network, The Hospitality Real Estate Group and the Hotel Property Network.